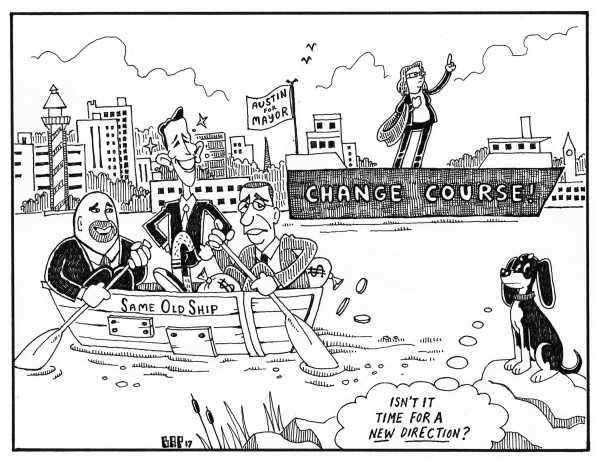 Tuesday, April 4: Lisa Austin will be accepting the 2017’s Dynamite Dozen Award honoring “Women in the Erie Community” by the Mercy Center for Women. The ceremony is Tuesday, April 4 @ 7 pm, Mercyhurst University Campus, 501 East 38th St., Erie, PA 16546 and open to the public.

Democratic Mayoral candidate Lisa Austin will open her campaign headquarters in downtown Erie on February 15, 2017 at the historic Masonic Temple, 32 West 8th Street. A public Open House is scheduled from 4-7 p.m. Petitions will be available, and the candidate will answer questions and talk with voters.

Premier of "STITCH" by Lisa Austin

STITCH, the 2016 silent film-short about Erie, PA by Lisa Austin, will premier in Maryland this week as a part of Nikki Brugnoli Whipkey ’s invitational drawing exhibit, Drawn Out, Drawn Over: Mapping the Territory of Experience. The show runs through March 11, 2017 at the Prince George’s County Department of Arts and Recreation’s Brentwood Arts Exchange, 3901 Rhode Island Ave., Brentwood, MD. Lisa will attend the reception Saturday, Jan. 21 at 5 p.m., along with 17 other artists from around the country.

Send a quick note to campaign@austinforerie.com

WANT LISA TO SPEAK TO YOUR ORGANIZATION?